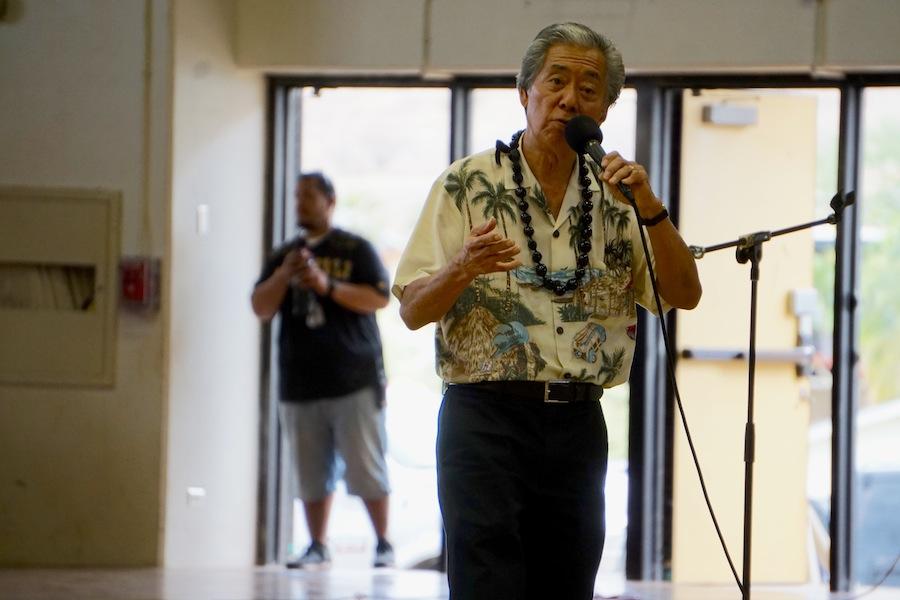 Roy Sakuma speaks to students about releasing the hurt inside of them. (Alysia Kepaa)

Roy Sakuma speaks to students about releasing the hurt inside of them.

On January 20th, 2017, the Goldens Hawks were visited by a well-known Ukulele teacher, Roy Sakuma. Many in the audience who attended this assembly expected to be treated to a musical concert but instead, Sakuma gave the students a motivational talk.

Sakuma is a Hawaiian ukulele teacher and the founder of the Ukulele Festival, the largest annual ukulele concert in the world. There are three schools around the island started by Sakuma.

Sakuma told the students the story of his life and how he grew up with a rather rough childhood.

The assembly started with how Roy’s schizophrenic mother who was not able to support him through his troubling childhood. He also mentioned that when he was young his brother tried to kill him then was taken away to a mental hospital.

Roy struggled with his everyday life. Roy skipped out of school, started smoking in first grade, drinking in 5th grade, and was kicked out of intermediate.

Sakuma went on to explain how we all have pain but we need to release the pain by sharing with someone and to not pass on the pain to others by treating them with love.

The presentation had an effect on many students.

“He made me get emotional,” said Brandy Senas, sophomore.

“I thought it was good in the beginning, but after he just kept repeating the same thing over and over.” Said Kianie Kaaihue, sophomore.

To close out the assembly, Sakuma did play a song about being true to who you are and accepting others. He got the whole student body to sing along.

Aliana Dunbara, sophomore, said, “I started to tear up a little bit because some of the things that he said kind of related to me.”

Alexis Palmer, freshman, said “This became very useful for school because it gave others and myself a hope that going through a rough patch isn’t the end of our lives”

“Dear students and teachers of Nanakuli High and Intermediate,

I just wanted you to know that I have not stopped thinking of you! I care very much for each and every one of you and hope that something I shared that afternoon has touched your heart and have given you a better understanding of your feelings as well as others. I truly love you and wish you the very best.

With my Love and Blessings,

Ka Leo 'O Nanakuli intends for this area to be used to foster healthy, thought-provoking discussion. Comments are expected to adhere to our standards and to be respectful and constructive. As such, we do not permit the use of profanity, foul language, personal attacks, or the use of language that might be interpreted as libelous. Comments are reviewed and must be approved by a moderator to ensure that they meet these standards. Ka Leo 'O Nanakuli does not allow anonymous comments, and Ka Leo 'O Nanakuli requires a valid email address. The email address will not be displayed but will be used to confirm your comments.
All Ka Leo ʻO Nanakuli Picks Reader Picks Sort: Newest