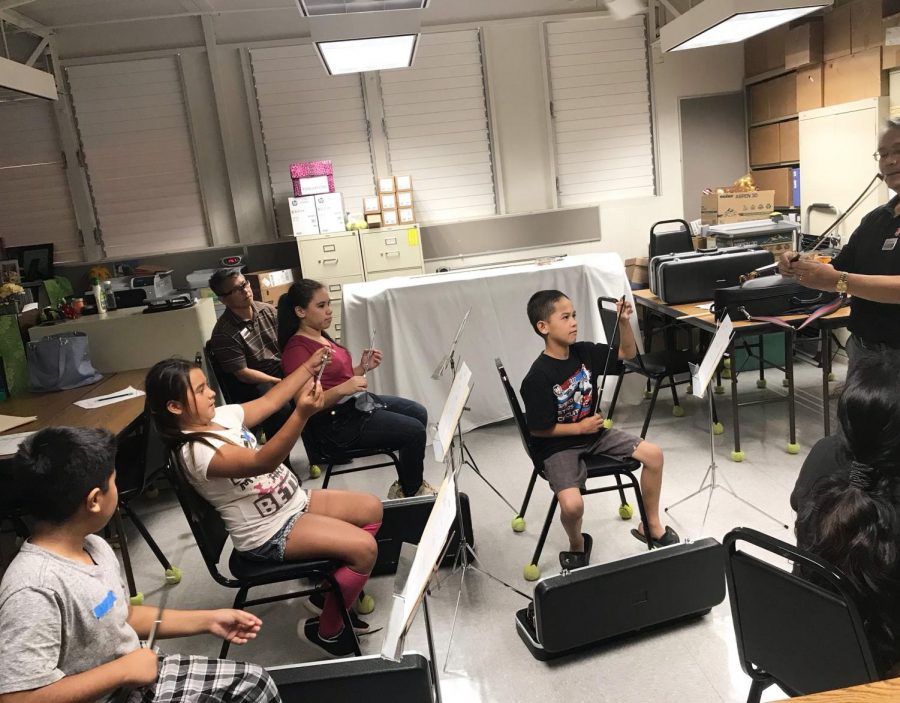 Nanakuli Elementary School (NES), opened up the Strings Program which gives students the opportunity to play the violin.

This program was put into place because the Strings Program wanted to give Nanakuli students the same opportunity to learn about the arts.

Rick Han Operations Director said, “This program here in Nanakuli got started because we identified the lack of affordable, quality of music and proper education and that’s what we do at the KROC Center.”

They spoke to the school and the school wanted them to have the opportunity for Nanakuli Elementary.

Han said, “We were able to speak with some of the administrators here and they said they would love for us to come in and partner with them to bring this sort of education to the kids. The timing worked out and we’re committed to doing this for the entire school year.”

Once the administrators agreed to the program coming in, the timing made it easy for them to be involved.

Students began to sign up for the program and now there are sixteen students total.

“It’s hit or miss every week depending, but right now we’ve been told that sixteen kids would like to be part of the program,” said Han

To get instruments they had donors donate violins.

“We have existing relationships with some really supportive partners such as The Campbell Foundation. They have given quite a few resources to many organizations like ourselves. They obviously believe in the Westside. It was sort of not an easy task but they were definitely open arms when it came to us asking them for help,” said Han.

They had one more partner, Strings for Tomorrow, who also believe in giving young kids a musical education.

Han said, “They were very gracious and provided the very high-level instruments for the program. We have been really blessed by partners. Without them, it would be very difficult take this program.”

The students involved in the program like that they get to learn about music.

Students decided to join the program simply out of interest in the musical arts.

Nyla Conrad 6th grader said, “I chose to join the program because I thought it was interesting and it looked like a fun instrument.”

There were some challenges along the way such as moving locations and getting the equipment needed to run the program.

“I think the first challenge was trying to figure out how logistically to bring a string program from our center to a remote location like this school here. We needed to figure out funding for instruments and the donors to fund the program,” said Ariana Smith Programs Assistant.

Once all of that was figured out it was just creating connections.

Smith said, “After that, it was just building the relationship between the school here and trying to make sure we have kids that will get to benefit from the program that we’re bringing.”

The program really wants to impact students lives not only in musical aspects but in personal growth.

“We’re hoping that they learn things through music that will give them the benefit of being able to cooperate with others, being able to think outside the box, having perseverance and determination, to learn a new skill and be able to take the time and practice that it takes in order to develop better skills in music which will translate into a lot of life skills,” said Smith.

Creating this program has changed some people. It has been an opportunity to allow them to be grateful and feel blessed.

“It helps me in the gratitude I have for where I’ve come from and what I get to do at this point in life in giving back to the kids. It just continues to enrich my life in terms of being able to give back. I’m grateful for that,” Han said.

“For kids here to have the opportunity that I had to go outside of my own community in order to find has really been an eye-opening thing for me and I’m hoping that it will be a big blessing for the kids here even if they don’t continue in the strings program,” said Smith.

Students want to stay in this program to learn more about the arts.

Conrad said, “It’s a really fun instrument and I want to know how to play it so if I get one I can show my sister them how to play it.”

The coordinators of the program want to change the kids lives not just for the short term but long term, they want to make an impact on the community.

Han said, “The purpose of the program is really to sort of give back to the community to help and inspire kids to in music and be on in music. It’s just life skills so hopefully what they will experience is more than learning an instrument, like a violin it’s really learning about responsibility, commitment, developing their passion for music and the arts.”