Once is never enough for NPAC 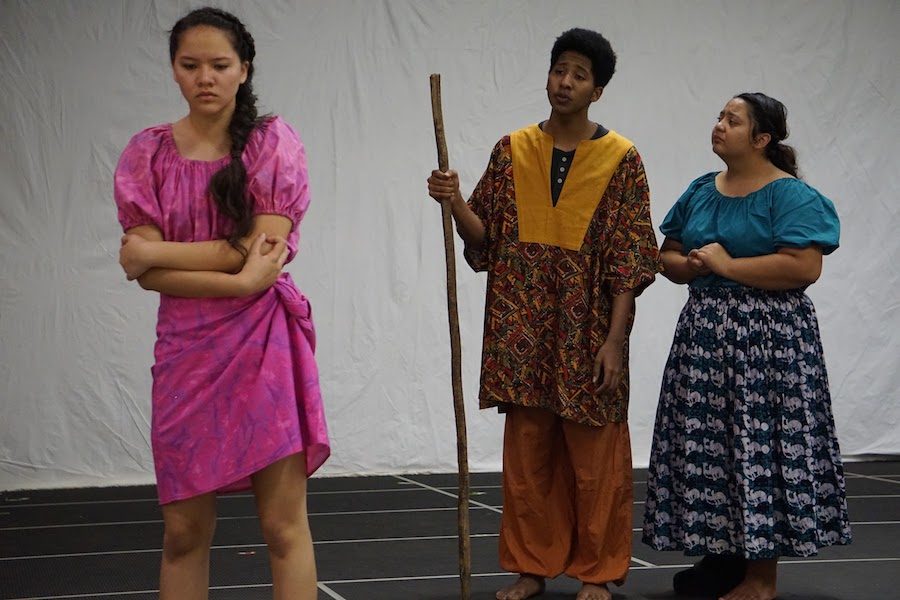 Aurora Slover is Ti Moune, Zaccai Ceruti is Ton Ton, and Brandy Senas is Mama Euralie in Once On This Island.

From March 10 to the 19, the Nanakuli High and Intermediate School Performing Arts Center presents the musical Once on This Island by Lynn Ahrens and music by Stephen Flaherty at the NHIS Multi-Purpose Cafe.

The musical follows Ti Moune, a peasant girl in the Antilles who falls in love with Daniel, a young man who she saves from a car crash. When he returns to his wealthy family on the other side of the island, the four gods: Mother of the Earth Asaka, God of Water Agwe, Goddess of Love Erzulie, and Demon of Death Papa Ge, guide Ti Moune on her journey to test the power of love against prejudice and hate.

Once on This Island was not the first choice for Director Robin Kitsu. “Originally we were going to do the musical, Disney’s Beauty and Beast, as it would tie into the movie version coming out at the same time but we had some issues that would prevent us from putting in the time and energy needed to do the show.”

This will be fourth time NPAC is producing Once On This Island, but the message the show portrays has had an impact on why it was selected.

Cast member, Aurora Slover, said, “With the state of the world right now, love is what we need to be showing and that is reflected quite a lot in Once on This Island. We can all come together through love.”

“Although not a well known show to the general public, theatre people love this show for the music, the characters, and the themes of compassion, love, and understanding,” said Kitsu.

There were some challenges that came along when putting together the show.

Cast member, Brandy Senas, said, “Some of the challenges I’ve come across working on the show was to get in touch with my character and the setting of where the show takes place. I’m actually still getting use to it and trying to get deeper into what I already know of my character.”

Another challenge some cast members faced was the challenge of taking on a lead role for the first time.

Cast member, Weston Oliva, said “This is my first full acting show I’ve ever been in and I’m a main character. I’m also scared because I may mess up on lines or like I just forget and don’t remember and I throw everything off and things would be ruined.”

This is also the first time the NHIS Theatre Craft class is working on a production with NPAC.

“This is the first year that NHIS offered a Theatre Craft class and all of their activities early in the year led to construction of the sets and backdrops for this show,” said Kitsu.

The Theatre Craft class students were responsible for painting the backdrop, building a giant tree, and creating other foliage to decorate the stage.

“People should come to see Once On this island to spark inspiration and get encouraged to do anything they want,” said cast member, Zaccai Ceruti.

Senas said, “It’s just a rollercoaster of emotions that’ll make you think about yourself and your own personal experiences.”