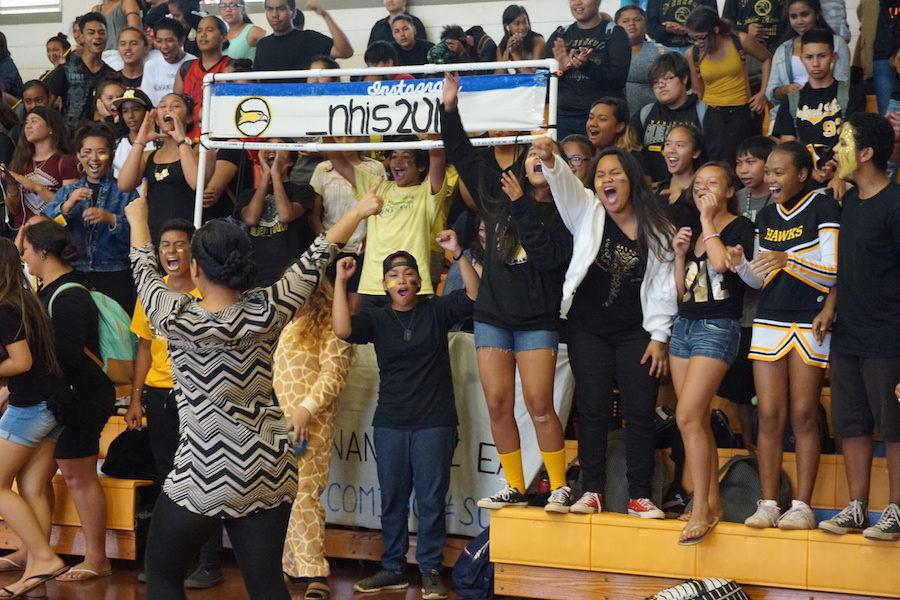 The Class of 2019 show their spirit during the Homecoming Pep Rally.

Homecoming is a traditional event that school’s everywhere hold to welcome back alumni, celebrate the football team, and to enjoy friendly competition between grade levels.

According to Jean Nishi, the Student Activities coordinator, the most challenging part was the constant date change of the homecoming parade.

The parade, which was originally on the day of the game, was first changed to Wednesday, August 31, because of a Conservation Congress event that included President Barack Obama and thus no police were allowed to do special duty work such as directing traffic for the parade.

However on Friday, August 26, word came that the police were going to be on duty beginning on August 31.

Nishi said, “We can’t have the parade even on the 31st. Our only option was now move it to one more day ahead of that, August 30. So because this all came down on Friday we had to scramble. Friday afternoon we are making phone calls, calling Nanaikapono, Nanakuli Elementary, submitting another HPD request for assistance at the parade. We had to notify all the teachers, the band, JROTC, we had to notify the church that we meet at.”

Class of 2020 Vice President, Holben Cashmyer, said that he also ran into some challenges with the date changes. “A lot of us had extra curricular activities and after school programs to go to so we had only a limited amount of time [to finish the banners].”

Rosalie Hobbs, Student Body President, said that besides the date change, everything went well and she is proud of the Homecoming outcome.

“The students have been amazing. This past Homecoming experience for me personally has been a whole different thing because it just seems like this whole Homecoming has been more active, more interactive with the student body.”

Everyday during lunch, each grade level hosted a small game. Along with the games, students and staff members were encouraged to dress up for Homecoming week. Each student who dressed up gained one point for their class, while each teacher who dressed up gained five class points for the class.

The five dress up days were:

On Friday, the pep rally started with the JROTC presentation and the band playing the National Anthem and Hawai’i Pono’i. The fall sports teams were then introduced and received their bags, complimentary of the alumni.

After introducing each sport, the alumni then went on to each grade level to judge the competition yell, which is a cheer that each class participates in to see who is the loudest.

At the end of the pep rally, the JV and varsity football team come out to present a haka before lining up and singing the school’s Alma Mater.

Then in the afternoon, the football games against Kailua Surfriders took place.

The NHIS JV football team ended the game with a win as the final score of 22-0.

The Star Spangled Banner was sung by the 2016 homecoming queen April Alaimalo, before both varsity teams came out to do their school’s alma mater.

During the halftime show the Homecoming court was presented. JROTC walked out to the middle of the football field, where the court then walked through the sabers.

And although the game ended with a 34-21 loss against the Kailua Surfriders, the various activities brought students, staff, alumni, and the community together.

Although there were some challenges with this Homecoming, everyone pulled through and according to Hobbs, this year’s homecoming made history.

Shirlene Watson, Senior Class Advisor, said, “I think this year the turnout has been greater and better compared to the previous homecoming years.”