The Show Must Go On

NPAC still going in its 30th year despite pandemic 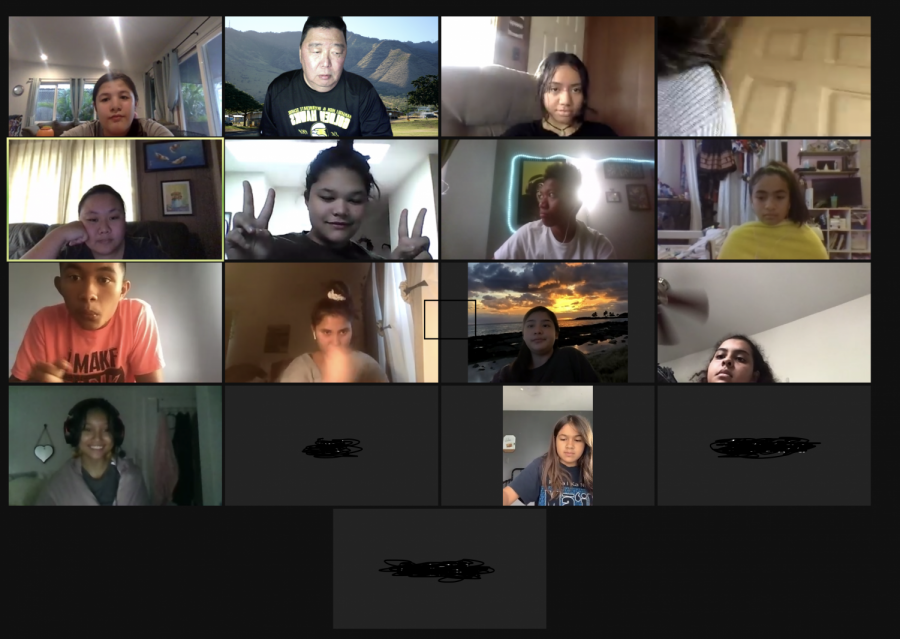 NPAC holds virtual rehearsals due to the pandemic.

Going on thirty years, the Nānākuli High and Intermediate School Performing Arts Center (NPAC), has created countless productions, from extravagant Broadway musicals to serious educational plays on social issues that have touched the lives of many audience members.

NPAC has been successful in producing over 150 productions/performances here at school and on the mainland and Europe despite facing many challenges in terms of resources and student participation.

How does a community-building drama program function in a pandemic?

As a drama group tasked with producing three different productions, rehearsal is critical to the function and overall quality of the program and programs it presents.

With the CO-VID 19 pandemic forcing many after school co and extracurricular activities to refrain from large group in-person events, rehearsals for NPAC have been forced online where they are held on Zoom.

With Wi-Fi challenges and other general obstacles associated with virtual learning, NPAC has become more flexible.

“We can end early and it doesnʻt hurt anyone — like ‘Oh, my parents have to come early now —  thought we were going to end at six but instead we ended at five,’” said Kitsu

Though this is good for students and their parents, good for the mentors, in the same way, this flexibility, left unchecked, created a problem for the virtual NPAC becoming accustomed to distanced acting.

“One of the challenges we faced early on was, not only the students but families because everything is virtual, I think we didn’t take it seriously. We would say “rehearsal starts at 3:30” and theyʻre driving on the freeway- whereas, in the past, they were expected to be at the cafe at a certain time,” said Kitsu.

“It took me a while to kind of realize wait- wait, this isnʻt the NPAC way, there are expectations- and so we had to re-establish our routines and policies and expectations with everyone, including myself,” said Kitsu

Despite a renewed emphasis on time commitment students still are prone to tardiness because of external factors. Including the kind of normal issues associated with distance learning: Wi-Fi dropping in and out, extreme stress on each respective families bandwidth, etc.

In addition to these technical issues, there are also problems born of the homelife.

Kitsu says, “Being in the cafe all together created a safe environment for them but I think whatʻs happened is, being at home and having to perform, sing, or act, and even recording, itʻs hard because there are dogs barking, cars driving by, etc.”

“Especially for the newer, younger kids, they feel self-conscious; it’s kind of like when youʻre riding in your car and you like a song and you’re singing but you donʻt sing loud because you’re kind of shame. So weʻre working on those things. I think weʻre doing the best we can.”

Senior and second-year veteran Emma Seeya said, “For me, the hardest part was being comfortable practicing at home. I worry a lot about what others think of me so belting out theatre songs at home has been a major challenge, Though, thanks to that fear, I have improved my vocal control.”

There are many ramifications to becoming virtual- and as one can imagine: transforming an in-person, very physical program, to a program fit for quarantine, is no small task.

Since no production can be performed live, NPAC has resorted to videotaping individual performances and then editing the videos into a cohesive production.

Yet despite the changes and the challenges, NPAC has still been commended for their recent show “Insights”, a show about mental illness for the National Alliance on Mental Illness, shared on October 10th.

“Our first project was creating a video with four monologues on some mental health issues and some strategies to cope that was shared with the National Health Alliance on Mental Illness for their virtual walk,” said Kitsu

“The video was also shared with faculty and staff at NHIS and was shared during their advisory period. Many teachers commended the video in helping start the discussion on mental health issues students face such as social anxiety,” said Kitsu.

NPAC will also open to new students in early January. The main reason that NPAC was not open to newcomers in the first semester was it was unaccustomed to the new realm of virtual.

“I didnʻt want to open up in the first semester until I was sure I knew what I was doing and what we could do. Now that I have a better handle, weʻre going to open up to new students in January,” said Kitsu.

NPAC is now better prepared and equipped with new tools and a better understanding of the virtual realm. There are so many challenges that NPAC is facing but the students remain adamant about their participation in it, as the Kitsu family is committed to continuing the program.

Ford said, “It is what it is, there really isn’t much I can do about COVID-19 affecting how we are running NPAC this year. I am grateful that I am still able to participate in NPAC even if it is virtual and it’s all thanks to the Kitsu family that we are able to still have this program.”

Kitsu feels the same way, for him there was no question about not doing NPAC this year.

“The question is why wouldn’t we, I think the arts are important… The purpose of this program isn’t to create people to perform on Broadway. It’s to get them to find their passion to develop the skills they need for college and work and develop their self-esteem through the process of performance.”

“They may think they are a little different in a regular school environment  but coming to NPAC they find their place… here I am normal. That has always been our mission.”

Seeya said, “I am not a very outgoing person and somehow the arts are the best way I can connect comfortably. I also need a place where I can express myself through ways that I can. NPAC lets me do both. Through NPAC, I am significantly more outgoing than I used to be and I now have a creative outlet.”