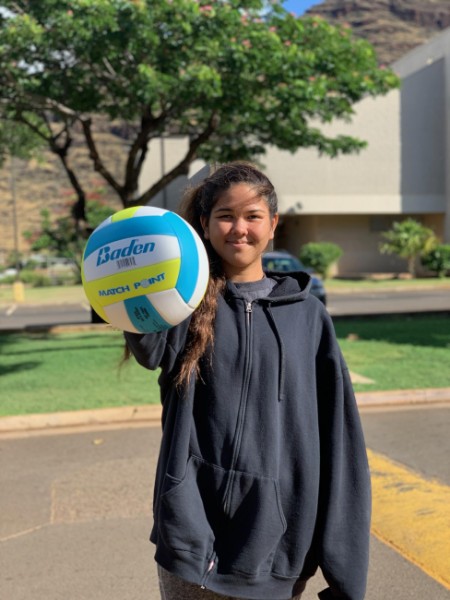 Ever since I was a kid I wanted to play volleyball. My mom didn’t really want me playing any sports because I always get hurt but that didn’t stop me from playing any sport.  I watched all of my older sister and brothers games when they were playing here at Nānākuli and most of my family played volleyball. I heard that my uncle was the best player when he played here at Nānākuli and was well known.

I was definitely concerned about making the team especially since I didn’t play volleyball the whole summer, I was always cleaning or watching my baby sister.

The best thing have been my teammates, they helped me ever since I first came to practice. For example, one thing I learned that I didn’t know about was the rotations. I know where to go now just not when I kind of know when not well though.

I’m not gonna lie but the first two days of practice before the weekend was kind of hard for me and I was hurting and tired, I wasn’t my usual active self I’ll say, but as the days went on and I went to every single practice even though I was having problems with myself I eventually got used to it.

After a couple of practices during the summer, it was tryouts and it was good, I missed a day because I was sick but I still made the team and I’m happy about that,  I finally get to play volleyball for a school. Tryouts were good we did simple drills like passing and volleying and so on and that was it.

I made it through the season and the games and the joy of winning and the pain of losing.

And now the season is over.

It was a good experience and there’s many more to come as I have reached my dream and will continue to pursue it every year in high school.