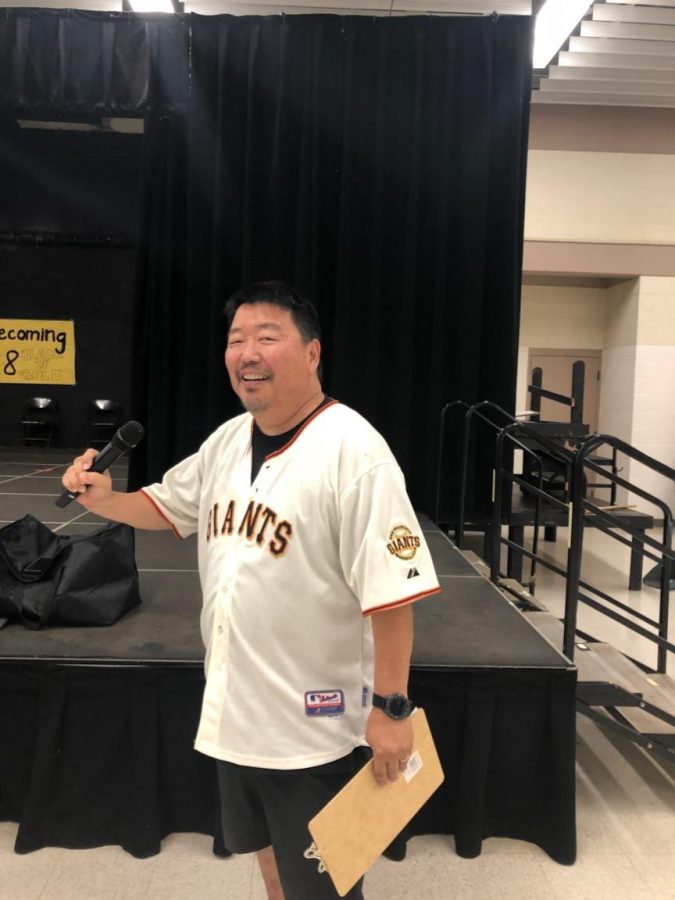 Robin Kitsu is the new SAC at NHIS and wants students to believe they can make a difference in the school and community.

Robin Kitsu continues to dedicate himself to Nānākuli High and Intermediate School in a multitude of programs, roles, and events. He has now taken on the job of replacing the retired Student Activities Coordinator (SAC), Jean Nishi, as the new SAC since September 1, 2018.

Kitsu knows there will be some difficulties as the new SAC.

“She (Nishi) has done it for so long, she has done a great job, she’s so organized. I have the utmost respect for her and it’s intimidating to follow in her footsteps.  I’m humbled that Mr. Pilialoha, Nānākuli principal, selected me to do it,” said Kitsu.

Senior Jasmine Kamanaʻo has worked with Kitsu as a News Writing student and knows that he will bring in other content areas that will help students such as college preparation activities and producing the morning bulletin.

“Knowing that Mr. Kitsu is the type of person to get things done and produces quality work, I know that he will make a great SAC. I’m glad that he is in this position because he is very inclusive, which is something I admire. With being the SAC and advisor of student government, this is a good trait to have,” said Kamanaʻo.

Kitsu has a number of roles at NHIS. He is the Nānākuli High and Intermediate School Performing Arts (NPAC) director, the News Writing teacher, and was responsible for many of the school support and curriculum duties such as the WASC/FOL coordinator.

Yet the SAC offered something more for Kitsu.

“I felt like it was a way to give back to the school and community. I wanted to work with new students and different students. Now my hope is to instill in them a belief that they can make a difference in the school, the community and in the world,” said Kitsu.

9th-grade advisor Philip Morales said that Nishi did so much for NHIS in her time as SAC but also has positive thoughts on the change.

“Mr. Kitsu, he’s been here for a long time and has done so much for this school. I think he will do good. It’s hard to improve on the program. His plans are probably to carry on the work that Mrs. Nishi did,” said Morales.

Kitsu explained that much of what he has done at NHIS over the last 28 years will prepare him for his new role.

“I think being the Student Activities Coordinator involves the things that I already do in terms of the NPAC activities but also I bring in my experience with the school paper and video production. I have also organized many events for the school and community so I am familiar with what the duties are. I am also a type A personality, I like to get things done. With this job, there are things to get done every day,” said Kitsu.

Nevertheless, Kitsu knows that he could never do it as well as Nishi did without the help of others.

“I don’t want to mess up, and I feel really good as  I’ve been talking with the other teachers and advisors and they’re willing to help out because I’m not Mrs. Nishi and so there are things that she did extremely well that I cannot,” said Kitsu.

One of the goals for Kitsu is working with the Student Government officers and helping them develop their leadership skills.

“I understand that the students volunteered to be officers and part of it may be because they thought they thought that’d be working with Mrs. Nishi so we got to get to know each other and we got to come to an understanding of what the vision is for the class,” said Kitsu.

Senior Advisor Donnamae Noa was a student of Kitsu’s in his drama class and feels those same traits he had as a teacher will be good as the SAC.

“What I know about Mr. Kitsu is that he is fair, he’s great with communication, and even though I only got to work with him for a little time that I got to spend with him, I learned a lot, so I appreciate that. I’m just so excited,” said Noa.

One of the goals that Kitsu has is to have more students involved in Student Government to help with the many different activities and plans for the year.

“One of the plans is to open up an after-school council, volunteers, so even though they’re not officers, I’m sure that there are students who want to help out because the council members we only meet three times a week so if we have more students who are willing to help out that would take a lot of stress off the officers,” said Kitsu.

Kitsu understands that being the new SAC will mean giving up some of his prior responsibilities and adjusting some of his current ones.

“ I have dropped my other role as school curricular support, meaning that I have assisted Mr. Pilialoha with the WASC, Title 1, and I assisted in giving feedback to the direction of the school. So they hired a new person to take on that role. I’ve canceled rehearsals (for NPAC) because I had to go to district meetings after school,” said Kitsu.

But Kitsu explained how his goal for students is the same as it has been since he started teaching.

“My philosophy is that the students have the power to make a difference. If they feel like there is something in the school that needs to be addressed or improved upon, I would like them to take that challenge and work on that. And my hope is that they will have the belief in themselves that they can make a difference in the world after high school,” said Kitsu.

“I think that his plan is for the whole school to come together and being the SAC kind of creates an opportunity to guide people in leadership and kind of brings our whole school together so that everybody is represented in Student Government and through that everyone has a voice,” said Noa.